Beneath the Skin:
An exhibition of paintings and other works by Annabel Mednick


and here are the links to the pages on this blog of the project as it has developed.

In early 2015 Leo Collins, a transgender female to male, with cerebral palsy, then aged 22, approached me as he was interested in working with an artist. He wanted to show that disability and constant movement is not a barrier to exploring life.  I am an experienced artist, working mainly in oil on canvas. I have sold and exhibited widely, and have won awards for my work, including at the BP National Portrait Gallery portrait awards.  I often work thematically over periods of time to create bodies of work to be presented in their entirety.

The idea of painting and drawing someone who moved, and who had altered his external appearance to fit more with what he felt like on the inside, appealed to me. Two years on, we now have a body of work that is ready to be presented in a touring exhibition that will incorporate paintings and drawings alongside film, sound and poetry. The exhibition invites the viewer to look at the person rather than the disability, but without pretending that the disability is not there. The exhibition also provides a basis for talks and audience discussion about issues related to disability and appearance, and can be installed in a variety of venues.

Over the time that Leo and I have been working together, we have developed a strong and intimate relationship, which I hope shows in the work. Taking a nebulous idea and letting it develop has been very rewarding.  But one of the unexpected and surprising outcomes I have found is the difficulty in showing movement and change in the still image, especially with the expressive marks of paint. Whilst photography can often show movement more effectively, paint can be subtler, revealing softer layers.

When Leo sat for me and I made some representational portraits, I discovered that painting a person with cerebral palsy is not very different to painting someone who doesn’t have a disability and who also moves a bit over a few hours. 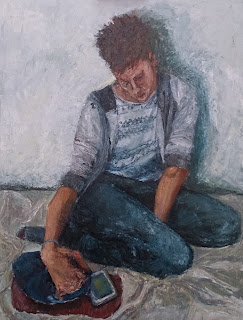 Painting from life was a challenge to both of us, and it certainly created physical challenges for Leo.  And while showing that disability need not be the central focus, Leo was nevertheless interested in me painting and drawing the scoliosis in his back, as that was a visible part of his body and of his disability. 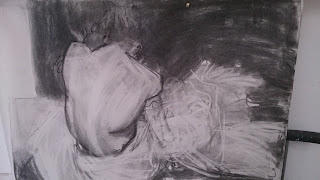 We had observed how disabled people, if represented at all, are rarely shown with status. Professor Stephen Hawking always wears a suit, and so we explored this idea with 'The Jacket' (oil on canvas, 76cmx 100cm). 'OK, look' (oil; on canvas 76cmx 100cm) was a response to an earlier exhibition I had held of paintings I had made of the model I work with (‘The Blue Years’, 2013). When we look at life drawing we look at the figure depicted; we may look at emotion, brush strokes, the human being. Whether the person is able-bodied is not the issue. Here Leo is simply 'the model'. 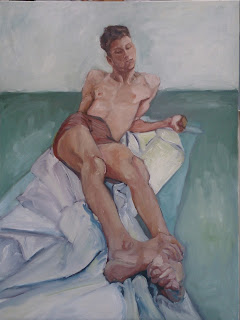 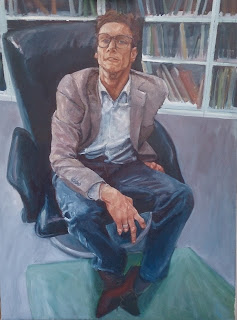 From time to time as well as painting I have photographed Leo. The photographic shoots were more experimental and we could explore more abstract concepts. I have made films of )these sessions, and they became the starting point for more paintings. 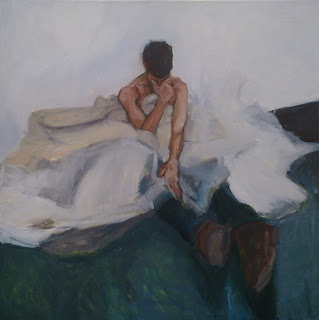 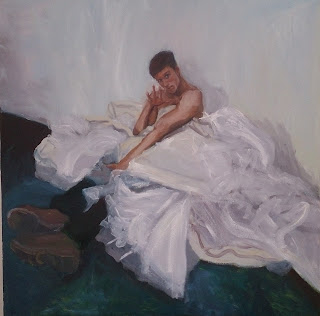 ‘Living with your expectations!’ and ‘I am me whatever I am wearing!’ (both oil on canvas, 90 x 90cm).
Identity emerging through gender specific clothes and pushing through the folds of a ball gown. 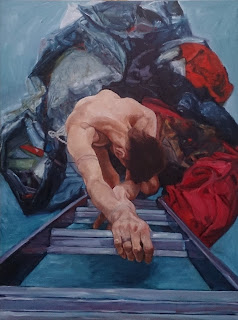 ‘Ascension’ (oil on canvas, 122 x 91cm)
The struggle of both gender and disability.

‘Chrysalis’ (mixed media and Perspex, 52x 122cm)
Exploring the internal fighting to break out of the external
As well as paintings, I have also created two large Perspex pieces (122x 122cm) that will sit centrally in the exhibition space. Using Leonardo’s Vitruvian Man as a starting point I look at what is the perfect man.  Using a transparent medium allows the viewer to see the other paintings in the exhibition through it, thereby experiencing a more complex, personal feeling over and above the paintings. 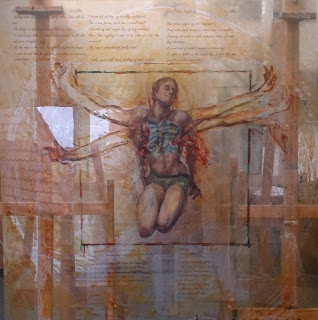 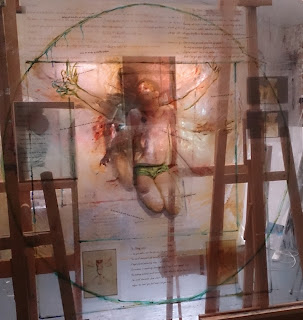 I will also show the photo shoot short films and documentation in real time, via film of a demonstration/conversation session with the subject, Leo, and an audience. Over the whole exhibition an audio track will play a recording of a conversation between Leo and me about his involuntary movements.
Leo is a sensitive, insightful young man, capable of enormous self-control and determination, and not interested in self-pity. His poems, which explore the ‘Does he take sugar?’ aspect of life that he encounters, will also be part of the exhibition, reinforcing the important theme of looking at the person, not the disability.

The exhibition works as a coherent installation, consisting of drawings, paintings on canvas and Perspex, and with film and sound recordings playing continuously. It also works as a durational piece, about process and change, with painting and drawing as the primary medium.
The exhibition can also include discussion between the artist, model and audience, providing opportunities for public and educational engagement around the central issues of disability and appearance. The exhibition is easily installed, and bookings can be made for periods throughout 2017 and 2018.