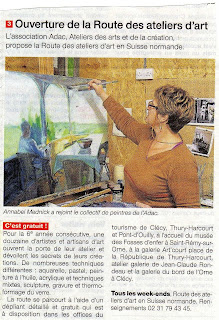 helloooo I'm back from France now..
Well the open studios was a unmitigated flop, I put up little expo signs and a huge banner and the very lovely flags I had had made.
- but there was no new La Route des Ateliers d’Art en Suisse Normande flyer this year.
-Perhaps something was lost in the translation - I thought that there would be a new one and the organizer thought that not enough new people had joined and there were lots of flyers left from last year so...
Anyway it meant we sorted out the room, and the other people in the village seem to be pleased to have their very own artist and some of them came to look. I also had two weekends in the little gallery at Thury Harcourt, oooh how slowly a couple of hours can go, but I got a couple of little bits in the local paper.. 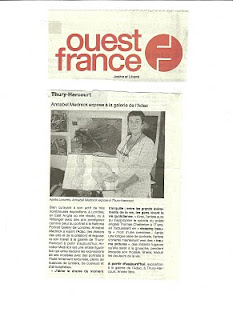 Posted by Ruby Red and the Bakelites at 15:45

Two press items - not such a flop after all!