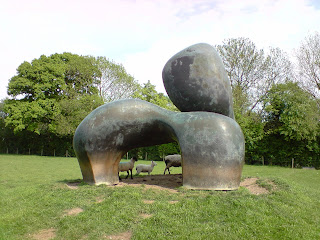 I've been let out of the studio....
been to two visits in a week. I go for months without seeing a show then one after the other. Arn't i a lucky woman.
went last Sunday to visit Henry Moores' house and studios at Hoglands at Perry Green. http://www.henry-moore-fdn.co.uk/
the house is interesting, - untouched since he died, even old notes about Christmas boxes to the milkman on the pin board. Then you can look around the gardens and sheep field and see lots of sculptures and his studio and workshops are fascinating with lots of helpful people to explain how his huge pieces were made. especially interesting to me was in his workshop there is a view of a hill with the large sculpture on it. There were two small mackettes that he tried out, they are tiny, but the scale is perfect. He could hold them up and they looked like they were on the hill, so he could see if they would work in situ before developing them further. Also in the workshop was a huge elephants skull that he liked to draw, and his natural forms (stones etc) that he abstracted to make his works.

Second trip was to Cambridge. I visited the Fitzwilliam Museum and saw an exhibition of Japanese prints and books. - wonderful, and then on to another house. Kettles Yard which was the home of Jim Ede, a former curator at the Tate Gallery, London, and his wife, Helen. It houses Ede's collection of art, mostly of the first half of the twentieth century.
It is three old cottages in Cambridge which have been knocked together allowing the spaces within join and flow. a lovely space to be in. very simply painted white, with indirect light from skylights. The collection is lovely but its the atmosphere of the place that is so appealing. It is very welcoming and comfortable. you can sit in the sofas and read the books. you feel you are an invited guest. - Again the people there are so helpful and friendly.
both place well worth a visit.
Posted by Ruby Red and the Bakelites at 10:00 No comments:

We went last night to the Roundhouse to see Andrew Logan's Alternative Miss World.
Brilliant. Such a relaxed time. The costumes were inspirational.
My friend Scarlet held up the numbers and was as beautiful as ever.
Posted by Ruby Red and the Bakelites at 12:26 No comments: