The Tomb of the Unknown Craftsman

I have just been to see Grayson Perry at the British Museum.
it was fantastic. he must be one of the greatest British Artists in the last thirty years.
- maybe it is because he actually crafts the things he makes, something magical happens in the creation process, decisions are made as the thing evolves, its hands on; not just found objects or  ideas sketched out and brought to being by others.  Yes some objects shown here are created by craftsman, but of course there has always been that process in iron and bronze sculpturs, the clay model made by the artist and the transformation by the technician, the alchemy of collaboration.
I was moved, amazed, thrilled. Its so much more than the quote from the British museum web site.
The objects are sensitive, reflections of the complexity of the world. My favourite thing made by Perry  was Our Mother and Our Father, 80 cm high these beautifully sensitive iron cast people carry objects representing civilisation past and present on their backs and around their necks.  I also loved the huge pot at the beginning of the exhibition. all the arty types who may come are represented here, Grayson Perrys skilled drawing makes each person immediately recognisable....who are you?
from his choice of things from the museums collection, It has to be the clay, mud and cowrie shell Boli figure - which is a large rounded featureless whale shape (without the tail), with four squat legs at each corner, sort of like a moomin troll, ( if you ever knew them.) and a little shell under its neck.
The whole show had compassion, love, and humour for the whole human race.
The quote from the British museum web site.
'Grayson Perry curates an installation of his new works alongside objects made by unknown men and women throughout history from the British Museum’s collection.


He’ll take you to an afterlife conjured from his imaginary world, exploring a range of themes connected with notions of craftsmanship and sacred journeys – from shamanism, magic and holy relics to motorbikes, identity and contemporary culture.


Vases covered in witty captions, elaborate tapestries and the centrepiece, a richly decorated cast iron coffin-ship, will be displayed alongside objects from the past two million years of culture and civilisation. From the first great invention, the hand axe, to a Hello Kitty pilgrim hand-towel, you will discover a reality that is old and new, poetic and factual, and funny as well as grim.


‘This is a memorial to all the anonymous craftsmen that over the centuries have fashioned the manmade wonders of the world…
The craftsman’s anonymity I find especially resonant in an age of the celebrity artist.’


Grayson Perry RA, Turner Prize winner'
Posted by Ruby Red and the Bakelites at 17:26 No comments: 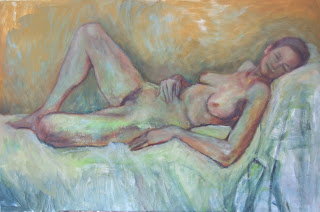 then have developed them to be more solid, will show next time.
just am oly interested in working from the model right now.
Posted by Ruby Red and the Bakelites at 19:50 No comments:

Tuesday and Wednesday Morning classes in six week blocks. Work alongside me in my Ipswich Studio. Practice your skills in painting and drawing in an informal and relaxed way, with lots of help and friendly advice. Just £72 for six sessions - please book to secure a place.

Private Tutorials; Arrange a time to suit you from £25 a half hour session. Do you want to explore oil paints, develop your style, or prepare your portfolio? Let’s develop a personalized program worked around your aims and needs.