The Show at the Frame Workshop Gallery

I took the paintings to the Frame Workshop Gallery in Ipswich, Suffolk, today first thing this morning and left them with Robin the Gallery owner with a hurried, "sorry to rush off,- and ooh I haven't put strings on the back,- I just haven't had a moment. I'll be back to help after drawing at about two. I'll help then"
and I dashed off , leaving a calm and collected Robin with them all. I do have absolute trust in him. He frames pictures beautifully and has always hung the shows well before;- but when I arrived at 2.15 it was all done and he had surpassed himself. Wow it looks great, there are two sorts of sets.- large paintings of solo figures of girls/women in strong colored dresses twisting in restless poses along one wall and some of the usual large interiors along another as well as a large painting of horses that he has place on an easel in the window and a few smaller studies around a long painting of a woman's back. - no easy job. I wish i had had a private view now as it looks so fab, it runs from
30th June to 29th July.
Posted by Ruby Red and the Bakelites at 17:26 No comments:

During my Open Studios weekend I thought I would explore some Ideas for Keyarts Ip-art show "Hybrid"... hmmmm..... The idea was a woman emerging from the walls of St Marys church; the Keyarts space.- like a dryad, but of plaster. So I got some plaster bandage-mudroc
and as Natalia was home that week- end she very kindly agreed to be subjected to this. 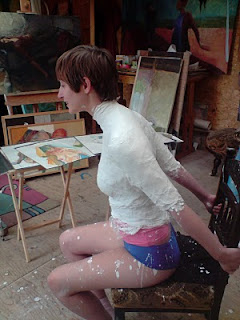 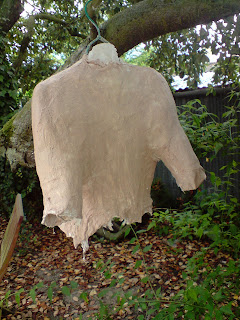 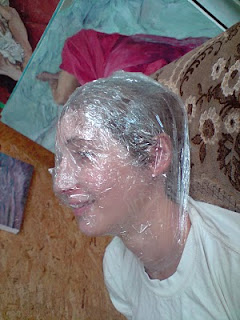 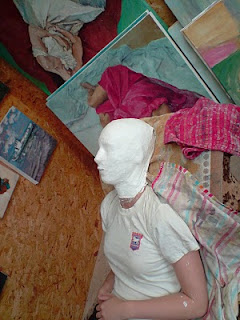 I did the body first, then cut it off her, let it dry, stitched it up then covered it with pink plaster. - the church walls are pink.- I then did her head, and leg. - the idea was to attach the head to the body, then make it look like it was coming out of the wall. You would have to have much greater skill than I to make this work. But it was very interesting to have a go.... and other ideas emerged from this. 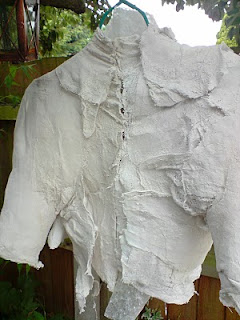 A sort of gothic frankenstine stiched thing, or a thing about body image, a big breast and a small one stitched onto a torso...
anyway, interesting as it was I don't think its succesfull enough to put into the show, but I'm glad I had a go.
Posted by Ruby Red and the Bakelites at 22:55 No comments:

I am opening my studio this weekend.- 12th and 13th June from 11am to 5pm
You can see what I am working on at the moment -
but... I've also empted my store room and there are lots of good paintings to look at.- (at good prices too! - all offers considered)
- I have had fun re discovering old pictures I had forgotten about and there are loads and loads of life sketches.
you can look at the blurb on
http://www.suffolkopenstudios.co.uk/artists/ipswich/annabel-mednick/
Posted by Ruby Red and the Bakelites at 20:01 No comments: